Hasui Prints Published by Sakai and Kawaguchi: One Edition Doesn’t Fit All

It’s difficult enough for Japanese print collectors to keep track of how different publishers differentiate (if at all) between multiple editions of their own prints. However, it’s particularly exasperating when publishers vary from what one understood their particular convention to have been.  I recently fielded a question from a fellow collector about first edition Kawase Hasui prints published by Sakai and Kawaguchi. While the basic parameters of my proposed response were correct, subsequent investigation forced me to reassess and partially revise certain long held beliefs on this question. 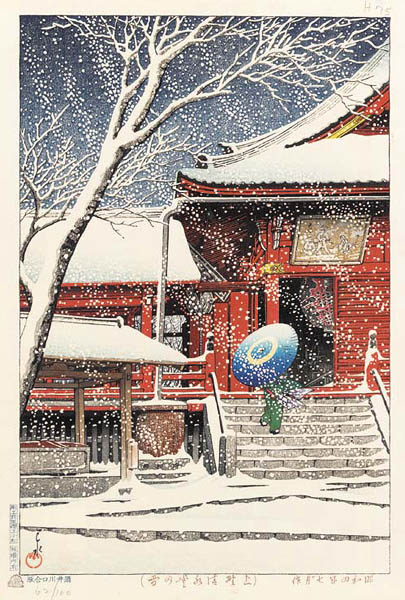 A first edition Hasui print originally published by Sakai and Kawaguchi (hereafter “S&K”) in 1929 should have a sticker attached to the back of print, at left. The sticker will bear a handwritten number between 1 and 100.  Hasui’s red seal (which sometimes bleeds through the paper, as on the Snow at Toshogu, Ueno print) will also appear on the sticker.    I know of no exception to this rule of thumb for such S&K prints first issued in 1929.  These designs are Snow at Kiyomizudo, Ueno; Snow at Miyajima; Snow at Toshogu, Ueno; Irises; Clearing After a Snow in the Pines; Benten Pond, Shiba; Snow at Benten Shrine , Inokashira; Futatsudo, Nikko; Rain at Ushibori; and Snow at Zojoji.

The second edition by S&K of those same 1929 designs should be an edition of 350.  Instead of a sticker, these prints have information hand-stamped in red directly onto the back of the print with the number of the edition added in black.  An example of the second edition stamp is shown below.

It is sometimes said that Kawaguchi, after the break-up of his partnership with Sakai in 1931, put out multiple limited editions in editions of 150, 250, 350, etc., but I’ve never made a comprehensive study of that. I suspect whether he did so varied depending on the popularity of the design. There are also copies put out by Kawaguchi with no number whatsoever. The goal for a collector or dealer is to differentiate between a second edition print put out by S&K, and a third or later edition put out by Kawaguchi alone, whether numbered or unnumbered. That can be accomplished in most cases by looking for the presence of one or more of three additional indicia.

LOne is if both Sakai and Kawaguchi’s names appear horizontally in kanji on the bottom of the margin of the print:

Another is if the print bears Kawaguichi’s oval seal written in katakana:

The third is the use of cartouches used to identify the carver’s [Maeda Kentaro] and printer’s [Komatsu Wasakichi] names and to provide copyright notice:

What if a print is numbered but lacks the A, B, and C cartouches and also fails to identify either S&K or Kawaguchi alone as the publisher? For some reason this appears to be the case with at least the Irises design. Even the first edition of that design lacks the carver’s and printer’s names, the copyright notice, and the publisher’s name, although it does have the limitation sticker. It may not be foolproof, but if the limitation stamp on the verso is for an edition of 350, my advice is to assume that it is a second edition put out by S&K. If the limitation stamp on the verso is for some other edition size, then it is a later edition put out by Kawaguchi alone.

In the 1950’s, the publisher Shobisha acquired the blocks from Kawaguchi and put out another edition.   It can be identified by Shobisha’s red circular seal in the margin.  This edition necessarily lacks cartouches A, B, or C because a different printer would have been used by Shobisha.

Shobisha issued another edition in the mid-1980s, but these lack the red circular seal.   Yet another edition (or more) was printed in this century, which looks the same as the mid-1980s version. The only difference is that the mid-1980s version is printed on heavier paper.
S&K occasionally used a stylized seal representing chrysanthemum and running water on some of their prints. Unfortunately there appears to be no correlation between the use of that seal and the print edition, and it appears on prints put out by Kawaguchi alone as well as on ones put out by S&K together. In effect, its only utility is to allow a collector to quickly distinguish such a print from one of those issued by Shobisha. However, its absence does not necessarily mean that the print was not by S&K or by Kawaguchi alone.

Now here’s the rub: The rule for the post-1929 S&K designs can be different.

For Lake Chuzenji, Nikko, everything I said above about first and second editions applies. The first edition of this print has a limitation sticker on the verso, and second edition produced by S&K has red stamp with the edition number written in black. After that, all bets are off.

If no copies of these four prints in fact exist with a limitation sticker on the verso, then the hand-stamped edition of 350 for at least Dusk at Ushibori and Rain at Omiya is, in reality, the first edition printing for those designs if produced by S&K. Perhaps with their partnership soon coming to an end, one or both of the publishers recognized that there wasn’t going to be time to print a second edition together and wanted to maximize their income from only one joint printing. For whatever reason, the presence of Sakai and Kawaguchi’s names on the recto, and/or the presence of the A or B cartouches becomes key for these two late designs. Any numbered version with the C seal and/or Kawaguchi’s oval seal for Dusk at Ushibori or Rain at Omiya would therefore be the second edition. 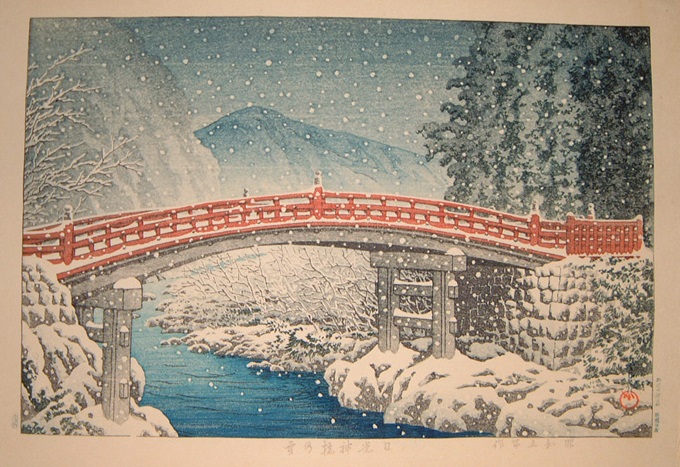 And there’s yet another rub.   The limited editions were made for the export market. By and large, the Japanese didn’t care if their prints were numbered, and it is known that S&K published copies without any number. For example, a copy of Rain at Omiya exists without any number but bearing the Sakai and Kawaguchi “B” cartouche, and therefore necessarily would have been printed before any copy bearing Kawaguchi’s oval seal or “C” information. Consequently, all other considerations being equal, the savvy collector should prefer an unnumbered S&K print over a numbered Kawaguchi print because it would reflect an earlier block impression. Indeed, the unnumbered S&K prints of these late designs were, in all likelihood, printed at the same time as the stamped copies. (For the earlier 1929 designs, a collector should also prefer an unnumbered S&K print over a numbered Kawaguchi print, but there is as yet no easy way to tell if the unnumbered S&K print is functionally equivalent to the first edition sticker version or the second edition stamped version.)

Moreover, since all copies of Snow at the Shin Bridge, Nikko and Dusk at Itako appear to lack S&K name on the verso and the A or B cartouches, it follows that the hand-stamped edition of 350 for the copies bearing the C seal and/or Kawaguchi oval seal is the de facto first edition for these two late designs. Of course, if these were made for the export market, it’s entirely possible that unnumbered copies made for the Japanese market were printed at the same time and therefore would be functionally equivalent to the stamped copies.

The final remaining S&K design, River and Pines, is listed but not illustrated in either Muneshige Narazaki’s Kawase Hasui Mokuhangashu or in Kendall Brown’s Kawase Hasui: The Complete Woodblock Prints.   I can only assume that this print was never commercially issued, which is the only logical explanation for why no copies have turned up in the marketplace. Presumably a few test prints were made before the design was abandoned, one of which was presumably brought to Narazaki’s attention by some private collector. If that print was in fact never editioned, then no copies should exist with any edition stickers or stamps. The rarity of that design, however, should more than compensate for the lack of first edition sticker.

My thanks to Robert Young for being a sounding board during the writing this article.  (c) 2016 Darrel C. Karl